I just competed in my second show. This prep was a lot more difficult for me. After the first show, I just got off-balance. I went from eating very strict to over indulging. The pendulum went from one end all the way to the other with no middle ground. I finally got myself together enough to prepare for this show but it was not easy. At three weeks out, I was ready to quit. It was a Sunday morning, and I had not gotten to the point in my prep where I thought I should be. It was so hard and I just felt like giving up. I literally quit….for 5 hours! After talking to people, my boyfriend, a good friend, and my coach, I sucked it up and continued on for the last three weeks. At this point, it was basically up to me to motivate myself.

It does not matter how many people tell you that you can do something. If you don’t believe it, it will never happen. I learned that lesson the hard way…

I was watching an interview with Gabby Douglas’ mother, and she talked about how much she sacrificed for her daughter. She is a single mother who works very hard! Gabby’s sister saw so much potential in her that she convinced the family to move across the country and train with Shawn Johnson’s coach. Even Gabby Douglas, an olympian….wanted to quit! She said that there were some tough times that she had to get through and she was not always motivated. Sometimes we look at people and put them on a pedestal thinking they never get discouraged. But even Gabby Douglas had her days.

I say this to tell you that no matter what you are facing, you can get through it. Pushing forward is what separates champions from the average person. We ALL have difficulties but it is how you react that makes you stronger or keeps you where you are.

So, I did my show and I got 3rd place in the Ms. Fit Body Division! Slowly but surely, I am getting close to first. 🙂 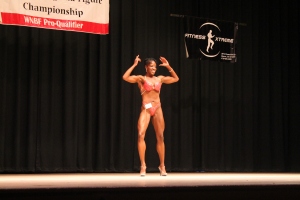 It Gets Better With Age!